Bell Canada announced that it will roll out 1 Gig service to Toronto, Montreal, Quebec City, Halifax and other major metro areas in the eastern half of Canada over the next couple of years, starting with 50,000 homes and businesses in Toronto this summer. They plan to eventually rollout the service to several million premises in the eastern Canadian provinces of Ontario, Quebec, Nova Scotia, Newfoundland and New Brunswick, including 1.1 million homes and businesses in Toronto.

“Bell Canada has served Toronto since 1880, and we’re proud to continue our legacy of communications leadership by bringing the fastest Internet speeds to consumers and businesses across Canada’s largest city. Gigabit Fibe is a revolutionary broadband communications service that puts Toronto out front as a world-class Smart City,” said George Cope, President and Chief Executive Officer of Bell Canada and BCE Inc.

“As we plan for the future, we need to invest in our city and put in place the infrastructure required to keep Toronto competitive,” said Mayor John Tory. “The rollout of Gigabit Fibe is a testament to Bell’s commitment to investing in Toronto. This is Canada’s largest gigabit Internet infrastructure project, creating 2,400 jobs for our city. I’d like to thank Bell Canada for investing in Toronto and delivering services that meet the needs of today and the future.”

Bell estimates Gigabit Fibe will create more than 8,000 direct and indirect jobs in Ontario and $2.5 billion in economic activity over the next 2 years.

The Bell Canada press release is available at http://www.bce.ca/news-and-media/releases/show/Bell-Gigabit-Fibe-bringing-the-fastest-Internet-to-Toronto-residents-with-a-billion-dollar-network-investment-creation-of-2-400-direct-jobs-1?page=1&month=&year= 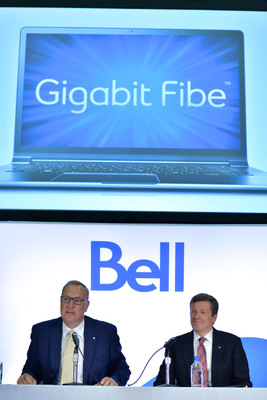