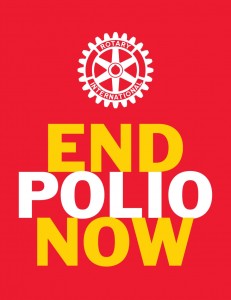 This past 24 July marked one year since Nigeria’s last case of wild poliovirus. That’s the longest period the country has gone without a case of the disease. This achievement has particular significance, because Nigeria is one of only three countries in the world in which polio is still endemic. When the disease is eradicated in Nigeria, Pakistan, and Afghanistan, the world will be free of polio.

Today, 11 August marks one year since the last case of polio in Africa: a case in Somalia that came at the end of an outbreak in the Horn of Africa. Africa’s countries have overcome significant challenges — including lack of security and difficulty reaching children in remote places — to protect their children from polio. Rotary has played an important role in reaching these milestones. Rotarians have dedicated their time and their personal resources to keep children safe from this disease by immunizing them, donating money, raising funds, and urging governments to support the cause. Rotary has donated $688.5 million to fight polio throughout Africa, including more than $200 million designated for Nigeria. While this is notable progress, we haven’t finished the job yet.

Before Africa can be certified polio-free, all countries in the region, including Nigeria, must pass two more years without a case of polio. To achieve this, we must make sure all children in Nigeria continue to receive the polio vaccine, including those in hard-to-reach and underserved areas. Maintaining high-quality immunization campaigns and disease surveillance throughout the continent is essential. Now more than ever, we need the support of Rotarians, partners, and governments. As recently as June, Rotary granted $19 million to support polio eradication efforts in Africa, including $9.9 million for Nigeria. By continuing to support polio eradication in these final years of the campaign, we ensure the best possible chance that 11 August 2014 marked the very last case of polio in Africa. Spread the news that we’re making progress, but this is only one step on the final road to polio eradication. Support Rotary’s continued efforts to fight polio by donating at endpolio.org.

Although it is far too early to declare victory against polio, we do deserve time to pause, and celebrate a major milestone. I invite all telecommunication engineers and optical transport specialists who will be in the Toronto-area this Friday, to come join me for a beer at the York Region Craft Beer Festival in support of Rotary. It will be held at the Richmond Hill Centre for the Performing Arts. Details at www.rotarybeertasting.com